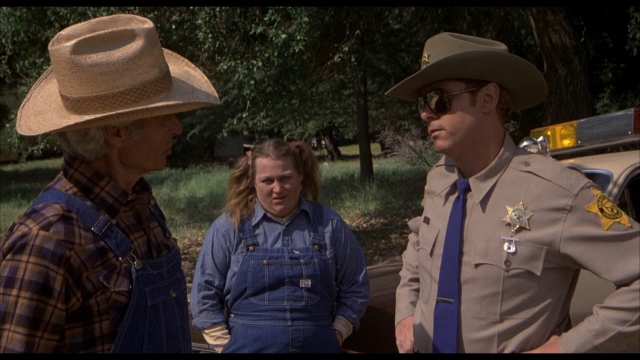 I had not seen the kooky “Motel Hell” (1980) since the late 80’s and was pleasantly surprised at how it holds up. Made on a modest budget, directed rather blandly and with an unevenly talented cast, the film still manages to work as a dark, entertaining comedy-horror that channels an E.C. Comics vibe. Rory Calhoun and Nancy Parson play a farmer and sister team that run a farm that happens to harvest people! The story is about as simple as they come and nothing here is really scary but it’s enjoyably bizarre. There are two elements that keep this film from being totally forgotten: One is the performances of the two leads. Their farmer-like work ethic and sincere love of their work is at once endearing and comical. The other is the central image of people buried up to their necks like heads of lettuce with their vocal cords cut out. That is something that you will never forget.

Another image I will never forget is that of  a $1000 weave. For his documentary “Good Hair” (2009), Chris Rock heads out to local beauty salons, businesses here and abroad (India – the largest exporter of real hair which is used in weaves) to find out what is behind the 9 billion (with a b) industry that caters exclusively to African-Americans (and accounts for 80% of ALL hair products sold in the U.S.) who want to “relax” their hair. Rock humorously impels high profile singers, actors and politicians (an especially funny Rev. Al Sharpton) to share their feelings on the difficult task of getting their hair to appear European as well as how hair is perceived in the black community. 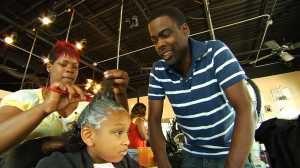 Chris Rock watches a young girl getting her hair relaxed (via Sodium hydroxide).

We learn things like a woman’s hair is off limits in the bedroom. We learn that quality weaves are anywhere from $1000 to $3500 and that women in India shave their long hair for God while the temple turns around and sells it to buyers here in the states who make them. For some black viewers, it will likely be an eye opener as to who benefits from the money generated in the hair care industry as well as where the products come from and the damage they can cause. It will certainly be hugely informative to white audiences who are unaware that having “good hair” is something that black women (and men) have to spend enormous amounts of money and time to achieve and maintain. Highly recommended.

Finally, I watched “The Descendants” (2011) with George Clooney as a husband/father who must deal with the aftermath of a boating accident that leaves his estranged wife in a coma. The film takes place in Hawaii and the balmy, breezy locations along with the sweet Hawaiian music run counterpoint to the somber drama that unfolds. Clooney plays Matt King, a man not particularly close to his daughters and who’s marriage has been failing for some time. His wife in a coma, he tries to reconnect with his troubled, older daughter and his sensitive younger daughter.  He also happens to be the sole trustee of a family trust that includes 25,000 acres of pristine land on the island of Kauai. He is confronted with having to sell the land to multiple businesses that will turn it into another resort destination. The locals are against it while his cousins are pressing him to sell (they’re broke- and they will get some of the money from the sale). While all of this is going on he discovers that his wife was having an affair. He decides to find out who her suitor is.

Shifting frequently from humor to melancholy, The Descendants shows the awkward ways in which people deal with crisis and grief. Clooney is excellent here; digesting bad news, internalizing his anger, forcing himself to do the right thing, breaking under pressure. Also excellent are his two daughters (Amara Miller, Patricia Hastie) who deal with their mother’s situation differently but the pain is visible and heartbreaking. Funny, angry and ultimately full of heart, the Descendants is a good choice for a rainy day rental.

This entry was posted in General Reviews. Bookmark the permalink.