Kubrick’s vision of the future

I just spent 3 days in Chicago attending screenings of 2001: A Space Odyssey (1968), Playtime (1967) and West Side Story (1961) in the film format they were photographed in: 70mm (technically the actual film image is 65mm with the rest of the space allotted for the soundtrack). For those of you who are not aware of why you would want to see something in 70mm, look here and here. This weekend was a  rare opportunity to see these films the way they were intended to be seen. It was a great experience, one that I will not soon forget.  70mm has been a discontinued medium for decades and soon all 35mm film is going away for good as well.  The good news is I believe that the current state of high quality digital cinema has several advantages over 35mm and 70mm film (in general) and seeing these films drove that point home to me. More on that later.

I love the town I live in (Cincinnati) but when you are in a city that is almost 10 times larger you are immediately blown away by the sheer numbers of people that show up for events like this. The Music Box Theater in Chicago has a main auditorium that seats about 750 people. On Thursday night, 2001: A Space Odyssey was sold out. This is a film that was made 45 years ago but here it is a weeknight and it’s packed with people. I turned to my friend at some point and expressed my disappointment that this kind of film-fan support is just not present in our wonderful city. 2001 would never sell out 750 seats on a Thursday night. He, rightfully, assessed that the proportion of fans to population is probably similar, Chicago just happens to be the third largest city in the country (Cincy is 64th which surprised me actually- I thought we would have been higher up).

At any rate, it is obviously a genuine treat to be sitting with 700+ people who all want to take the visual journey that Kubrick committed to film all those years ago (note to the Music Box: I love what you guys do and how you do it- you are first rate all the way, but…you guys need to invest in some new, comfortable seats).

What a trip indeed. It still amazes me how well the film holds up. It amazes me how a large studio like MGM allowed Kubrick to make and release a film that had to have confounded more than one executive (certainly audiences were either totally into it or they scratched their heads on the way out). It occurred to me how suited the material is to Kubrick’s meticulous style. Kubrick is H.A.L. in the end. Like the red-eyed super computer we love to hate, Kubrick has total control over all operations of this production and it all works because of his total commitment to every minute detail. Seeing it in a theater this particular time, with practically no distractions, it actually seemed to move quicker than I remember. Love it or hate it, 2001 is not known for it’s swift pace but I was surprised how quickly we get to the Jupiter mission. Douglas Trumball’s special effects are still miraculously convincing. Kubrick spends lengthy stretches of time showing us these visual miracles (e.g.  the landing of the lunar shuttle Aries lb) because, in 1968, Trumball’s special effects were positively groundbreaking. Seeing these scenes on the big screen in optimum resolution still filled me with wonder. 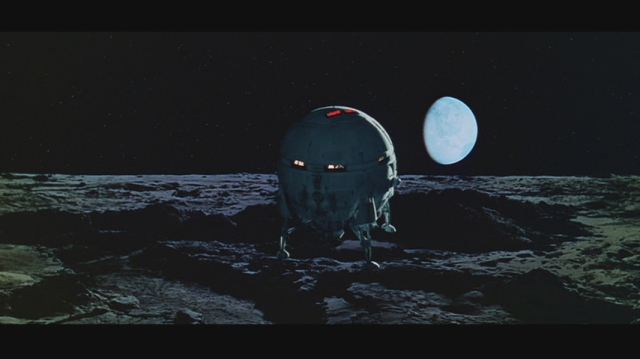 Playtime has no real screenplay or clear narrative; it is 2 hours of droll observation. Observations of people interacting, or trying to anyway, with each other in a modern, physical world that is constantly intruding, diverting and, at times, even harming . We are given only a few “main” characters that wander in and out of scenes (one is the famous Hulot character played by Tati himself). Shot in 70mm, Tati would only allow theaters equipped with the right equipment to run his film. It lost a lot of money (at the time it was the most expensive movie ever made in France) for that reason.

Tati gives us this huge canvas to look at, filled with people who are all doing different things. Everything is shot in medium and long shots. No close ups. Sometimes we are not even sure where to look. Sometimes the soundtrack points us to screen left or screen right. Sometimes, something is only happening in the very back of the frame somewhere and if we blinked we might have missed it. As the film goes on, the more complex these scenarios become; a newly opened restaurant filled to capacity becomes a loud, chaotic dance of mishaps with characters doing things often at the same time. It is such a unique movie going experience. It takes a little bit of time to get used to Tati’s universe but once you do, you become completely immersed. 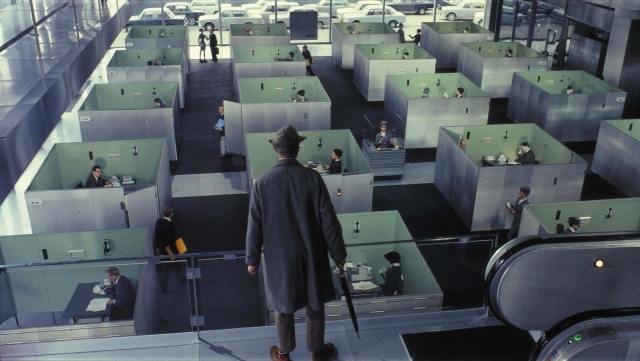 Hurlot (Tati) looks out over a sea of office cubicles. Environments like this are the enemy in Playtime.

Lastly, there was West Side Story; my favorite musical of all time. 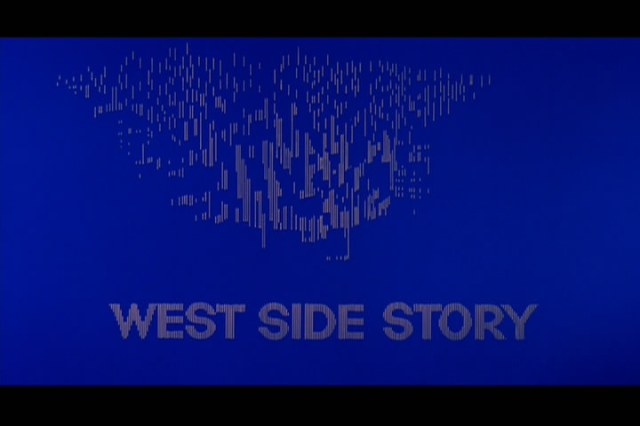 My passion for this film exists primarily because of Director Robert Wise, Choreographer Jerome Robbins and Composer Leonard Bernstein. For me, these three amazing craftsman/artists are the movie. The casting is uneven (Rita Morino is tops here) and the screenplay is so-so but the music, choreography and direction absolutely lift this film into euphoric places that still dig deep into my heart. Only near the end do the actors get an opportunity to elevate us emotionally the way that the music/dancing/direction does but there are definitely memorable moments: Tony trying to stop the fight, Maria’s disbelief of Chino’s news of her brother’s death, Maria and Anita in Maria’s room after the rumble, Doc telling Tony about Maria, Maria grieving at the end (Natalie Wood yelling “Don’t You Touch him!” is always a tipping point for me). 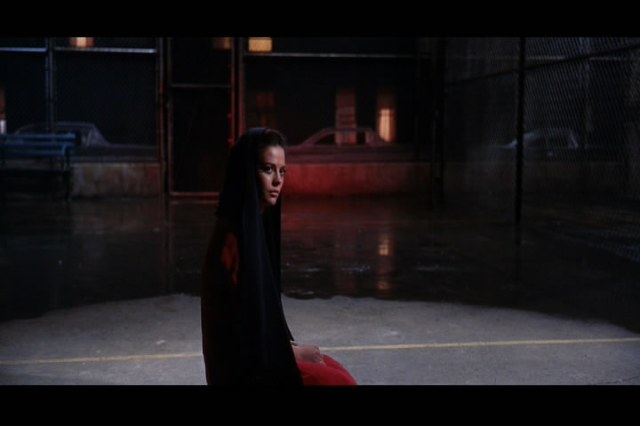 Natalie Wood grieving at the end

For me, however, the film’s most indigenous emotions come out in song and Leonard Bernstein’s legendary music is completely affecting. Lyrics/singing aside, his compositions for WSS are my favorite of all music of all genres.

Seeing Jerome Robbins’ choreography explode on a huge screen, framed and carried visually by Robert Wise’s camera is exactly what pure cinema is all about. The dance at the gym is a prime example. Watch and notice how the editing and the movement of the camera punctuate the dancing (at the 1:40 mark watch how Wise glides the camera to the right- love that)

The out-stretching of arms and legs is a beautiful, reoccurring image in WSS; first occuring in the opening prologue (especially at the 3:30 mark) Here is the entire prologue (in HD!). Imagine getting to see this in 70mm on a huge screen.

And my favorite display of the out-stretched arms and legs (and perhaps my favorite piece of choreography in the whole film) is in “Cool”.

Striking and volleying poses at each other

At the 3:12 mark, the girls and guys begin striking and volleying poses at each other and, again, Wise moves the camera and cuts in just the right places. 100% visceral.  Sorry the video quality is not that good in this one

It could certainly be argued that Robert Wise was the greatest craftsman to work in Hollywood. All of his films were a thoughtful balance of hard work, craft and restrained, artistic flourishes. West Side Story, like Sound of Music, is rich, rewarding and completely accessible. In other words, a perfect example of what a classic Hollywood film is.

I saw a handful of 70mm films back in the day. Most of those were just 35mm films that were blown up to 70mm so it was not the real deal. Seeing these films in 70mm was a reminder that, at one time, moviegoers were given a genuinely amazing visual experience when the lights went down. It was a heightened version of the story they came to see. It was like looking into a big window of another world. Bravo to The Music Box Theater and others like it for giving people a rare and wonderful opportunity.

Here’s the thing; As much as I love film it is, in the end, an imperfect medium. Not in terms of how it looks; it is absolutely magical to look it if the print is clean and the projection stable. Pushing light through the actual image is going to be better than a digital representation. But the truth is film gets dirty and it gets scratches and the film image isn’t always stable.  All three of the films I watched this weekend were full of imperfections. Image softness, noticeable wear and tear, image shifting, etc, etc. I still loved it. It still looked great. But when I saw The Master a few months ago in digital 4K resolution it looked completely amazing. The image was rock solid. No dirt and no wear. There was image grain visible. The qualities of film that it was missing were minute compared to the qualities of film it did have. If a theater has a quality digital projector and the print is 4K or better, it will look terrific. I want to reiterate that I love film. I love and cherish the screenings I was able to attend this weekend. But I am at peace with digital cinema. It’s getting better all the time. Now, having said that, I would drive up to Chicago tomorrow to be able to see what I saw this weekend. It was real movie magic folks.