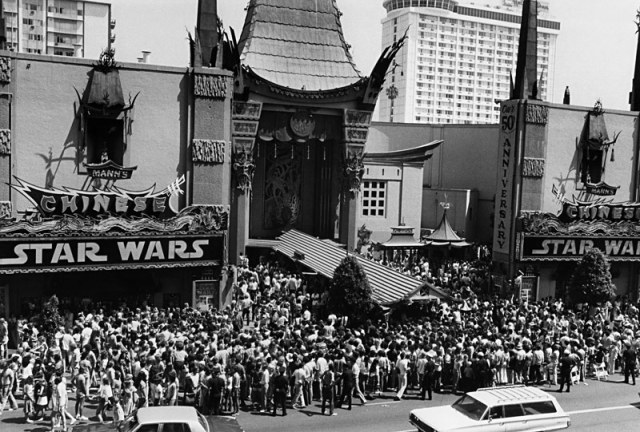 35 years ago today (it was a Wednesday back then), George Lucas’ Star Wars opened and changed everything including me.

Since that time, old fans like myself have gathered in corners all across the globe and grumbled over George’s lack of sanity as he has tinkered with and all-but-destroyed the original films to make way for his “special editions”.  These “rebel” fans now have technology at their disposal and there are great things going on in regards to restoring the originals to their theatrical glory.  If you dig around here you will discover what I am referring to.

Anyway, today I want to leave the bad blood behind.  Today I want to briefly describe how the summer of 77′ was a huge moment for this (at the time) 7 year old.

Star Wars originally opened in Cincinnati in one theater: Showcase Cinemas Springdale (in 70mm). Believe it or not, Star Wars only opened in 32 theaters nationwide that Wednesday (that number quickly went to 43 by Friday) and Cincinnati was one of them.  By late summer it played on about 1000 screens as the monumental box office returns poured in.  At some point that summer I remember sitting in the back of a car with my older sister’s friends as they enthusiastically explained this movie they had just seen.  I had never seen anyone get that animated or excited talking about a movie. I was spellbound by their description.  I began hearing similar stories with more frequency. I started seeing commercials on tv and hearing people talk about it on the radio. I absolutely had to see this movie! I remember my parents being reluctant to take me because someone had told them it was violent.  I begged and pleaded.

I finally caught a break as I sat in the doctor’s office of all places. My doctor was finishing up whatever I was there for (I can’t remember) and he turned to my Dad and asked if we had seen Star Wars yet. My Dad said no and then began to explain his concerns about the violence.  The doctor interrupted my Dad and began persuading him otherwise. On the way home my Dad agreed to take me to see it the next Saturday.

There were lines out the door and around the building. I had only seen things like The Apple Dumpling Gang and Swiss Family Robinson at the drive-in where it wasn’t all that crowded. This was something else.  We made our way in eventually and sat down. The lights went down.  The Fox fanfare started but no picture. The triumphant opening theme began and still no picture. People started booing and throwing things and getting up and turning around looking up into the projection booth. Total anarchy. The film stopped. The lights came back up. We waited. And waited. And then…

That humongous ship went over our heads as the theater rumbled and I felt as though my body may collapse from the shear excitement of it all. It really was the most exciting thing I had ever seen. I had gone to the movies before but I had never been so completely transfixed by what I was watching.  It was the ultimate ride for a kid my age. I walked out stunned.  It’s all I talked about for months. When school started that fall my circle of friends and I began making up games that were SW related and of course we began bringing in and trading our bubblegum cards.  It was a great time to be 7. It really was.

So for me, Star Wars is the original Kenner toys (made right here in Cincy), the Burger Chef posters (watch this), the funmeal trays (watch this too), the Wonder bread cards that came one per loaf, the awful Ben Cooper holloween costumes that came in a box, the topps cards of course and countless other items.  I had the Star Wars lunchbox which was accidentally smashed under the tire of the lady that drove me to school.

Star Wars also provided me with an endless world to use for imaginary play.  It didn’t matter where I played Star Wars but I must admit that I couldn’t wait to get to a beach so I could pretend I was on the planet Tatooine. When Empire Strikes Back came out 3 years later (what 7 year old could wait 3 years?), my backyard in the winter was the planet Hoth.

35 years later, Star Wars has gone on to mean all kinds of things and has been so permanently imbedded in our culture that, in a way, it has lost a little (or a lot depending on who you talk to) of what made it special. That’s ok though. There are lots of other great movies out there blowing the minds of other 7 year-olds.  It’s all perspective to be sure. Movies themselves have had a portion of what makes them special stripped away by the mere fact that they are so unbelievably accessible anytime, anywhere. 35 years ago just to go see a movie in a theater was something special.  Man, I sound old.  Anyway, Star Wars blew my mind, it stayed with me and it’s the reason I am still in the movie exhibition business in 2012.  Here’s to George, optical effects, matte paintings, John Williams, Ben Burtt and wookies.