War of the Worlds and the Parental Nightmare

Steven Spielberg’s War of the Worlds (2005) was the slick sci-fi action film that we have come to expect from the director.  Filled with amazing set pieces and created with his always top shelf production team; it delivered the goods. Based on the classic H.G. wells novel and certainly influenced by sci-fi films of the past (even the names of the main characters are nods to the sci-fi world: Ray (Ray Bradbury), Racheal (Blade Runner), Robby (Forbidden Planet), Spielberg’s version pays homage and does it’s own thing too.  In fact, I would speculate that at the 11 minute mark and for the rest of the film, Spielberg goes in a very unique direction. How I came to that conclusion evolved from the negative comments I remember reading/hearing about the ending of the film which seemed unnatural and contrived (more on that later).  But to summarize my theory, at the 11 minute mark Ray goes to sleep and for the rest of the film Spielberg tips his hat to that other 50’s classic sci-fi film Invaders from Mars (1953) as we witness Ray’s dream/nightmare.  And what is his nightmare? Being a parent. For the remaining 105 minutes, Ray will have to essentially run a gauntlet to prove his worth as a parent; facing some of the most primal/painful fears that parents experience and to hand deliver his kids safely to his ex-wife and his in-laws.  All of this will unfold across a dreamscape informed, like all dreams, by everyday things.  So to explain, let’s start at the beginning of the film.

After the main title appears, the first image we see is Ray working a gigantic crane on the docks of the Hudson.  Like a kid who has nightmares about the tree just outside his bedroom window, Ray will later be running for his life from crane-sized machines.

Ray gets off a long shift and heads home to sleep.  As he arrives home we are quickly brought up to speed on Ray’s life. He is a divorced father of two who’s blue collar, gear-head lifestyle clashes with his upper-middle class ex who has arrived (with a well healed new husband) to drop the kids off for the weekend.  His daughter Racheal is minimally friendly and his son Robby is indifferent bordering on angry.  Ray has no fans on the home front. His wife expresses concern and distrust over how Ray will handle his duties.  She leaves and the weekend begins. Ray tries to engage his kids in conversation and even forces Robby into tossing a baseball with him in the backyard.  It ends badly and Ray decides to avoid his children’s judgement for a while and goes inside to try and grab some sleep.

It’s here that we enter the dream of Ray Ferrier.  Just as the boy in Invaders from Mars is awakened by a violent storm (but he’s not awake-he’s dreaming) and soon discovers that aliens have invaded his backyard, Ray awakens to violent lightning and menacing skies. He too will have to deal with aliens.

At first Ray does not comprehend the seriousness of the situation.  As powerful lightning bolts are firing down into the ground, Ray playfully invites Rachael to come outside with him and look at it.  As all of the power is taken out, Ray leaves the kids alone in the house and ventures out into the neighborhood. In the first major set-piece of the film, a giant alien machine emerges from the ground. As the ground begins shaking and cracking apart, Ray has an almost giddy look on his face; still no sense of the danger he and his kids are in. And then, the machine rises.

After this violent attack, Spielberg ends the scene with Ray hiding behind a building as a man holding his daughter runs right in front of him.  Ray suddenly realizes he has left his kids home alone and unprotected.  The film cuts immediately to Rachael waiting for him at the screen door.

Ray returns in a state of shock which scares the kids.  He has finally grasped the austerity of his situation.  And though he has accepted his plight, he still rejects his obligation to deal with it.  Hoping to pass on his responsibility, Ray decides to drive the kids back to their mother’s house.  She is not home. He must go on.

He decides to make the journey to Boston where Mom, Grandma and Grandpa are hoped to be.  They begin in a van and end up on foot. At one point a caravan of military vehicles drives by and Robby pleads with them to let him go with them.  But Robby’s intention is not safety.  He wants to go with them to fight the machines (more on that shortly).  Ray is baffled/upset by Robby’s urges.

One of the parental fears that Spielberg visually repeats throughout the film is a small child (Rachael) being exposed to violence or death.  The most compelling example is when Rachael goes into the woods to go to the bathroom only to discover dead bodies floating down a river.  Ray shields her eyes.  Ray repeats this action later in the film when he must physically attack a stranger in order to protect them both.

As Ray and the kids continue on foot, the film arrives at what I consider the centerpiece of Ray’s nightmare.  It also contains one of the biggest fears any parent (especially in 2005) could have; a child joining the military during a war. This key scene is also one of the strangest and lends weight to my “dream” theory. A battle between the machines and the military is going on behind a giant hill; all we can see are explosions and flashes of light. Military vehicles are rushing up the hill and towards the fighting. Like the earlier scene, Robby is drawn to them. He breaks from Ray and Rachael and begins running towards the vehicles.  After commanding Rachael to not move from a spot under a tree, Ray chases after Robby. He begs Robby not to go. “You don’t have to do this!”Ray exclaims.  Robby responds, “I need to be here.  I need to see this. Please let me go. You need to let me go”. 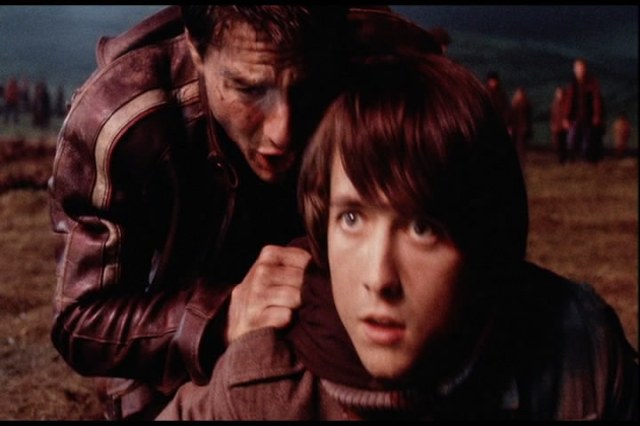 Spielberg ramps up the tension by having total strangers trying to take Rachael away from her spot at the tree at the same moment that Robby is pulling away from him on the hill.  You will notice too the dramatic but  unrealistic way that the scene ends with Robby and Ray looking at each other as they both acknowledge Robby’s decision. It plays out more like a dream.  The scene ends in fiery chaos with Robby seemingly ingested into the carnage.

Just as Ray saves Rachael from the strangers at the conclusion of this scene , he next enters into an abandoned house where he will eventually have to protect her again from a stranger who’s behavior will get them killed.  It’s implied that Ray has to kill the man; the most difficult decision a protective parent would have to make.  The last challenge Ray must face before crossing the finish line in Boston is with the machines themselves.  Rachael is captured and then a desperate Ray lets himself be captured.

After Ray ingeniously gets them free from the belly of the beast, Rachael looks at Ray with shock and gratitude.  Ray has proved himself to his little girl. 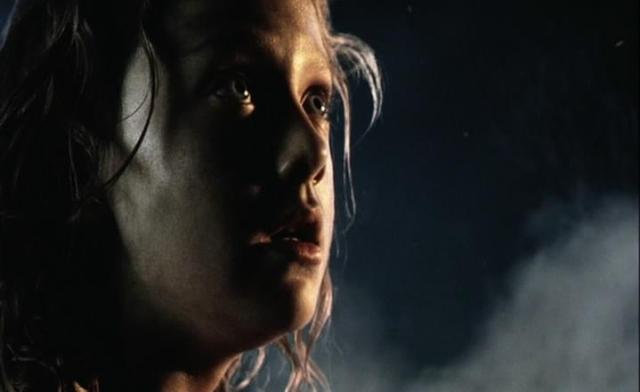 And now for the ending which seemed to rub some reviewers/viewers wrong.  I believe the whole scene plays out like a dreamy version of the ending of Ford’s The Searchers (1956) with Ray delivering his daughter to Mom, Grandma and Grandpa.  Spielberg blocks the scene in an intentionally unnatural way with Ray standing a good distance from the rest of his family.  Ray, like Ethan Edwards, is not a part of their world but has proved his love for his family and has earned their respect. No words are really spoken (also an unnatural choice) except by Robby who emerges from the Grandparents’ house and quietly says “hello Dad” repeatedly while they embrace.  Ray’s dream ends with Mom, Rachael and the Grandparents looking on in unified approval. 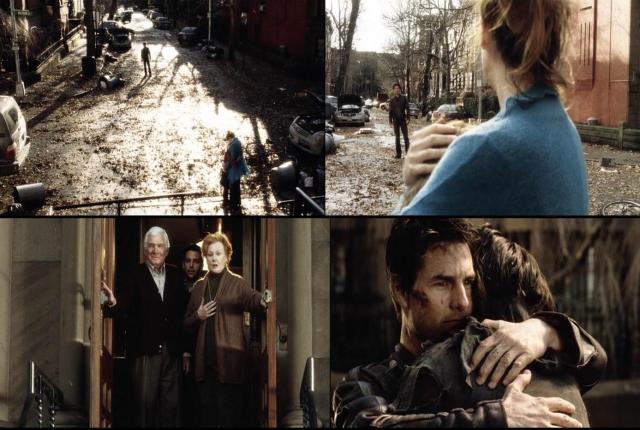 This entry was posted in Essays and tagged Cinema, Classic, Film, Invaders from Mars, Movie, Sci-Fi, Spielberg, Tom Cruise, War of the Worlds. Bookmark the permalink.

4 Responses to War of the Worlds and the Parental Nightmare